July 07, 2010
I celebrated my 26th birthday on June 11th, but was surprised with my gift a few days before. Jon is notorious for not being able to hold in surprises. He had to go out of town for work the weekend before my birthday. He called me while on his trip and told me that he'd gotten me a gift for my birthday. When he arrived home from his trip on Monday night, he asked me if I wanted the gift then or on my actual birthday on Friday. I knowing that he hates keeps surprises, told him that I wanted to wait until Friday. He then informed me that that was fine because he left it at the office anyway. Apparently we both like to tease one another :) So Tuesday night rolls around and again he asks me several time in a row "Are you SURRRE you don't want your present yet?" I can see that it's killing him at this point, but I remain steadfast and say I want it on Friday. Finally he lets the subject go.
Meanwhile, I'm in the kitchen cooking something for dinner and Jon is on the couch watching TV before his softball game that night. He yells to me in the kitchen that he really wants to watch Finding Nemo. This might sound strange coming from most men, but not my husband. He loves animated films, especially Finding Nemo. I ask if he has time before his game, and he says he does. I tell him that I have I own the movie, and it's in the TV cabinet and he says "REALLY?!? We own it?" as if I've just made his day. I said, "Yeah you can go ahead and put it in if you want since your game starts soon." He says, "Okay." A few seconds later, he yells back into the kitchen "Honey, I want to watch Finding Nemo." I tell him "Okay, I told you you can go ahead and start it. I'll be there in a minute." Again, he yells the same thing. At this point I'm a little frustrated because I've already told him where it was and that he can go ahead and start it without me, and I don't know why he keeps telling me the same thing over and over.
I walk into the living room and say "Honey, I told you where it is. Can you not get it yourself? It's right in here..." And as I open the cabinet, I see my beautiful birthday present, a MacBook Pro. I gasp and yell and finally understand why he kept saying "I want to watch Finding Nemo." I had no clue because I was under the impression that my gift had been at his office still.
So in the end, he didn't make it until Friday, but he did REALLY surprise me and it was wonderful!
Here is a shot of me finding it. 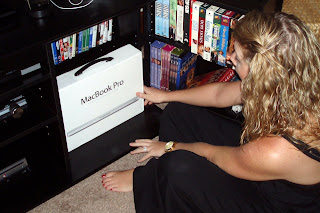 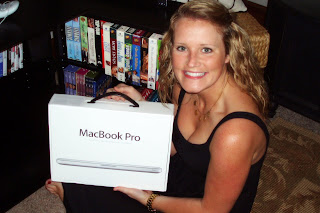