March 01, 2013
Over two months later, I'm finally getting around to posting on my nephew Cohen's first birthday!  Because he was born just six days before Christmas, it was important to my sister, Meredith, to have a party to make him feel special, separate of the normal seasonal celebrations.  And I'm always up for a planning a good party! 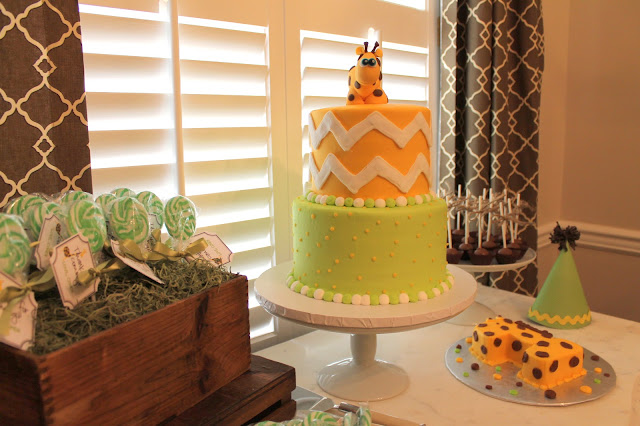 Since Cohen was little baby, he has loved giraffes.  First introduced with the paper mache bust hanging over the changing pad in his nursery(here), my sister says he's been a fan ever since.  Using that as the inspiration, the party planning began.  Meredith found an invitation she liked at Tiny Prints and thus the color palette of green, yellow and brown was established. 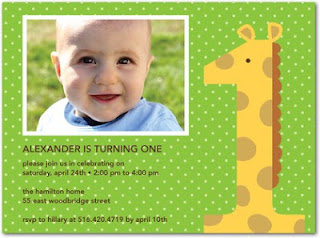 Cohen wore a monogrammed yellow chevron coverall on the big day, and the cheerful pattern was also used throughout the party.  To create a prominent backdrop on the fireplace mantel, we covered a remant piece of beadboard with chevron fabric.  It made a big statement with little cost and effort.  Also on the fireplace was a grouping of Cohen's pictures, paper fan wheels and an MDF letter C we covered in brown polka dot scrapbook paper.  The fan wheels were also made by us using scrapbook paper and a little tape.  There's nothing like a little craft time with sisters :)  The stitched "Happy Birthday" banner was an Etsy purchase that Meredith plans to use for years to come. 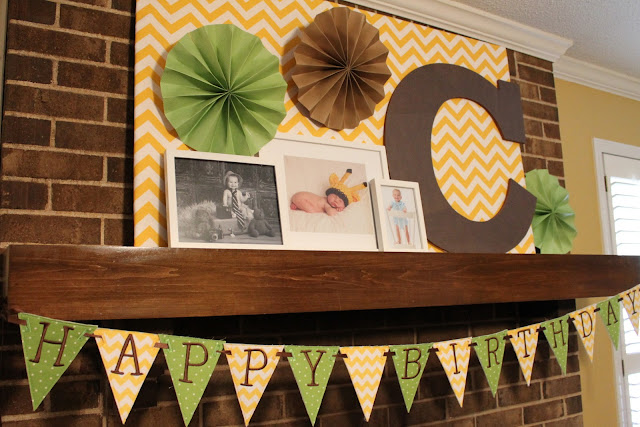 {And for a closer look...the suitcase picture of him is my all-time favorite.} 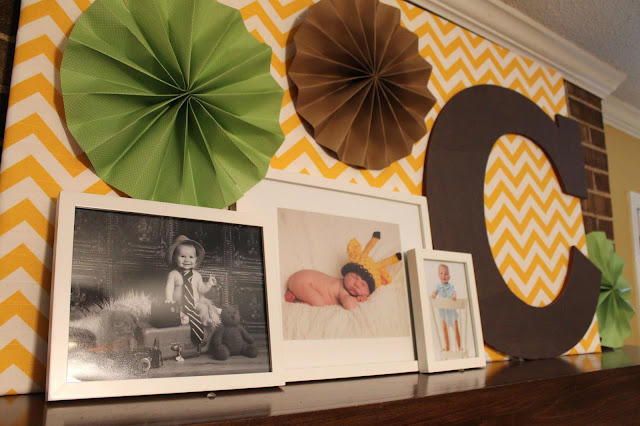 Here's the man of the hour in his adorable outfit and a shot of the giraffe painted number 1 hung at the door to greet guests.  Like the letter C above, Meredith found the MDF 1 and quickly informed me that I would be painting it to look like the giraffe on his invitation.  Anything for my nephew :)  The hair on the giraffe was created by folding pieces of yarn into a group of hill shapes and taping them to the back of the board.  Another easy project! 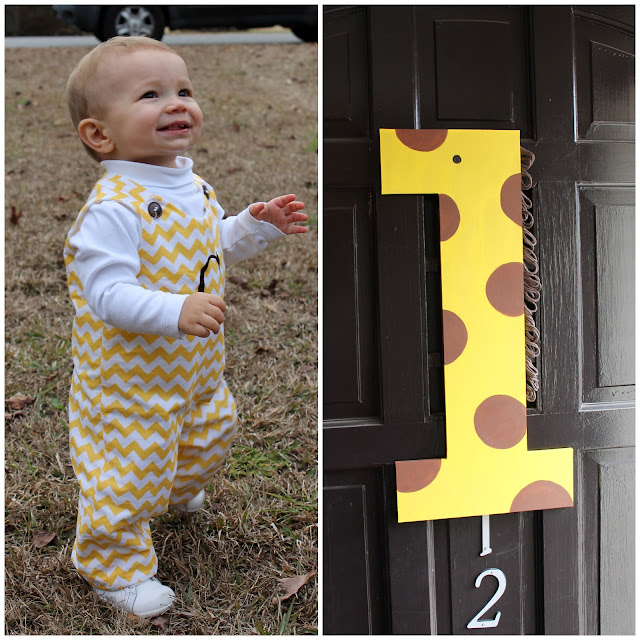 In the beverage department, mason jars were used for glasses, accompanied by green polka dot paper straws.  I created the lemonade label to match the food labels (coming up below) and attached it to the drink dispenser with a strip of twine.   Meredith's order of custom water bottle labels from Etsy tied in the chevron pattern again. 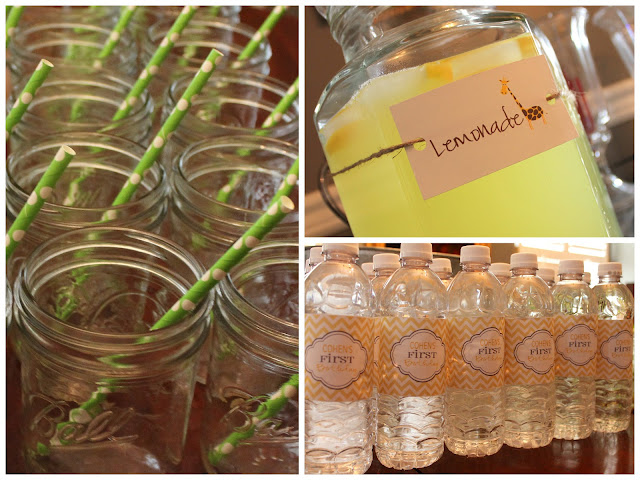 We kept the menu simple with chicken nuggets, pigs in a blanket, spinach dip, ham and cheese sliders, fruit skewers, sugar cookies, animal cracker and confetti dip, chocolate truffles and of course, cake!  I designed the food labels, and Meredith got them printed at a local office supply store (Tip: they higher quality printers, and you don't have to waste your own ink!). 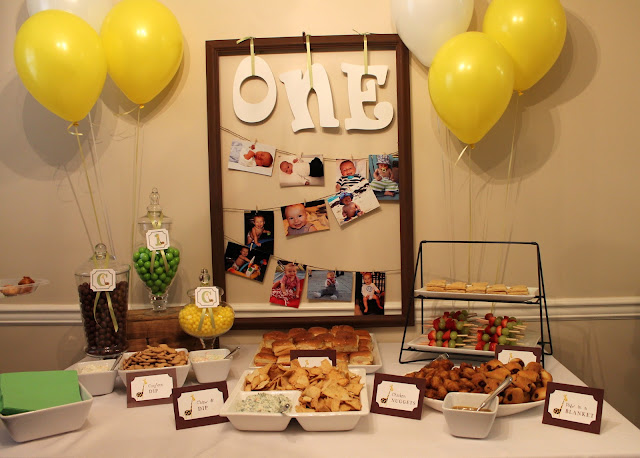 Cohen's daddy and big brother lended a hand by making the number 1 cookies.  Personal touches are what it's all about! 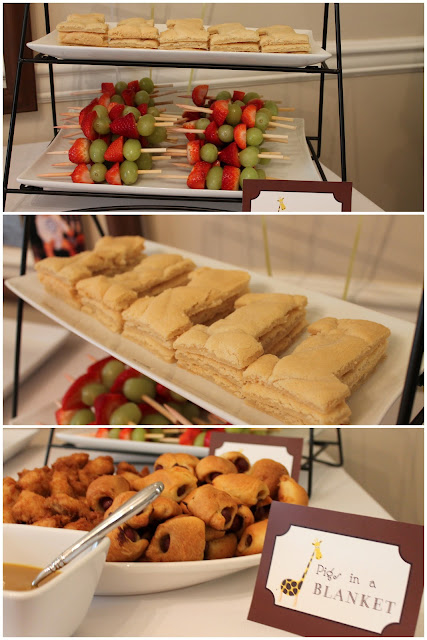 Stacked wooden boxes (also used here and here) made great stages for candy-filled apothecaries boasting the personalized tags I created with C's and 1's.  The green ribbon was left over from my own wedding projects :)  The main backdrop was an empty frame strung with jute twine and tiny wooden clothespins holding up monthly snapshots from Cohen's first year. 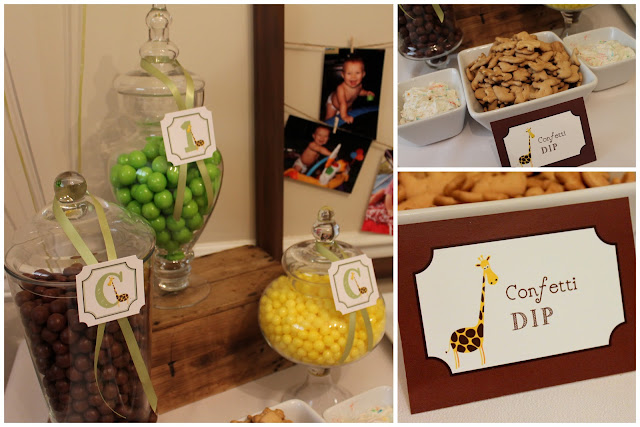 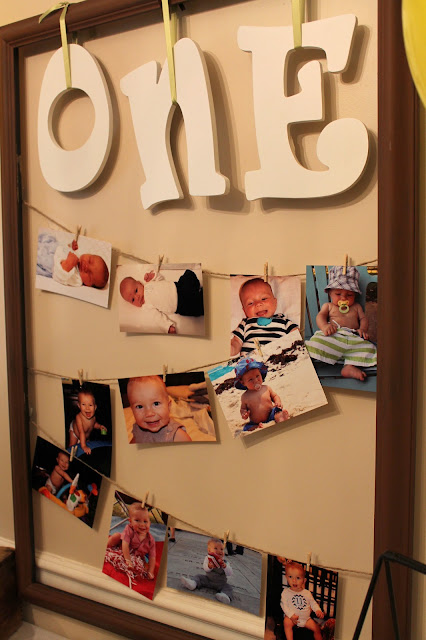 The cake table was the home for the sweets, featuring the party favors (green apple lollipops) and chocolate truffle sticks. The birthday hat was a product of mine and Meredith's craft time as well.  We recovered a cheap, store bought hat with green polka dot scrapbook paper, glued a strip of yellow ric rac around the bottom and added a homemade yarn pom pom to the top.  Meredith knew that Cohen hated hats so she didn't want to spend extra money on a personalized one only have to him pull it off in seconds.  And she was right...it was on his head for two seconds tops. 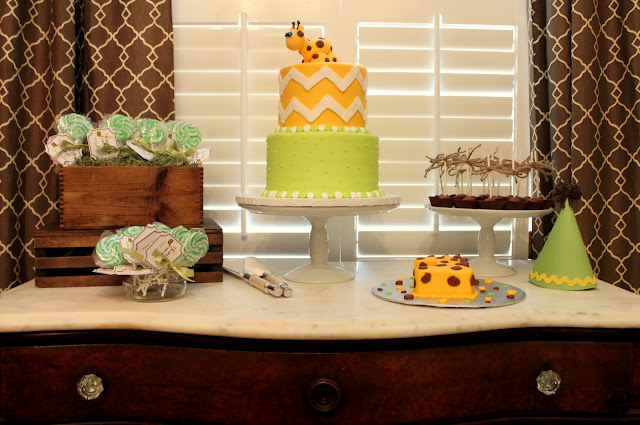 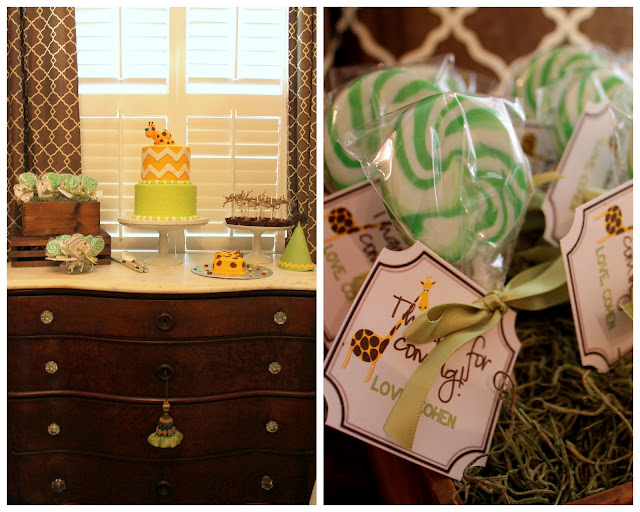 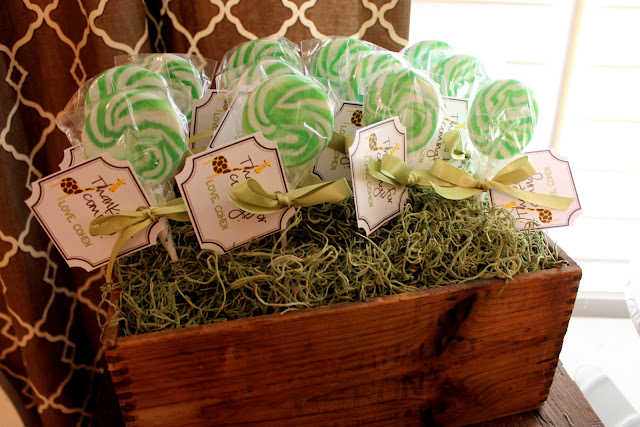 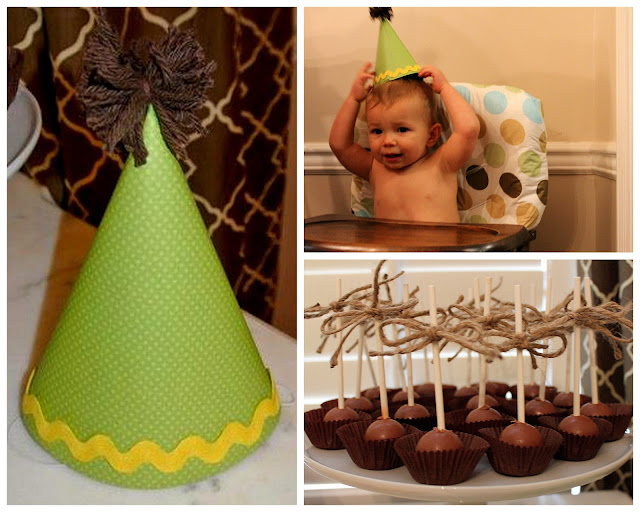 The cakes were made by Delicious Bakery in Alabaster, AL.  And while Cohen loved to look at them, I can't say that he was a fan of eating them...he's obviously nothing like his mother in that department. 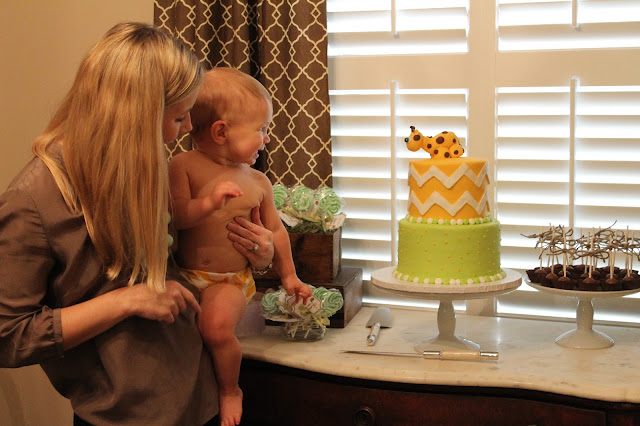 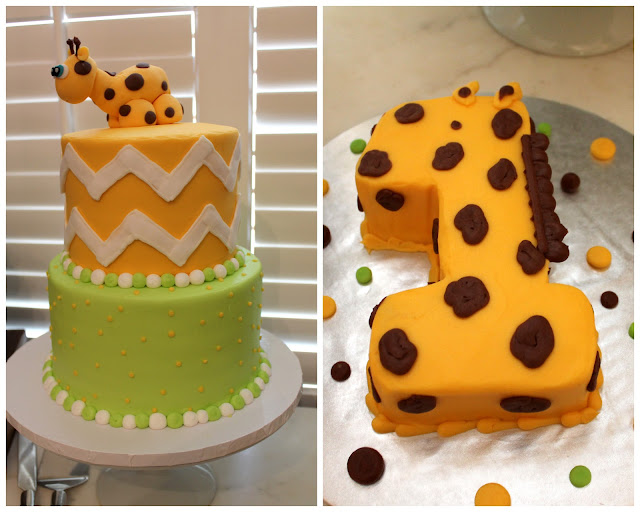 Please notice his big grin in the bottom right photo. 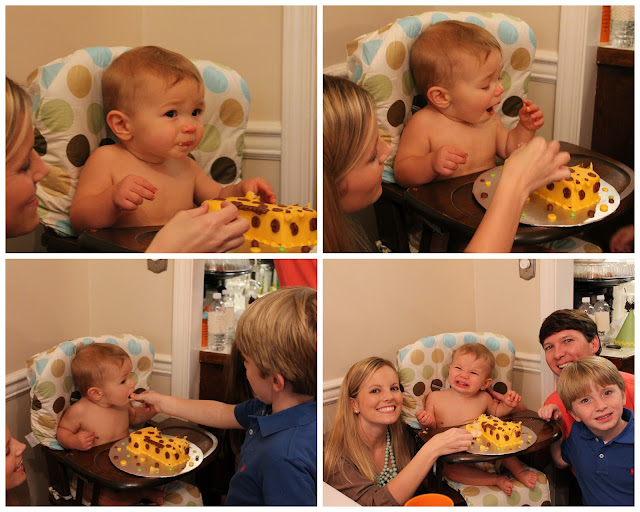 Oh well.  Even if he didn't "smash" the cake quite like we were expecting, he still looked cute doing it thanks to his matching diaper cover Mer ordered on Etsy.  Adorable! 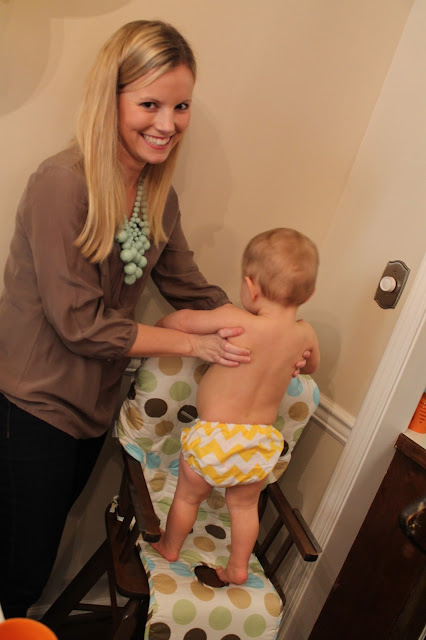 I think we pulled it off! 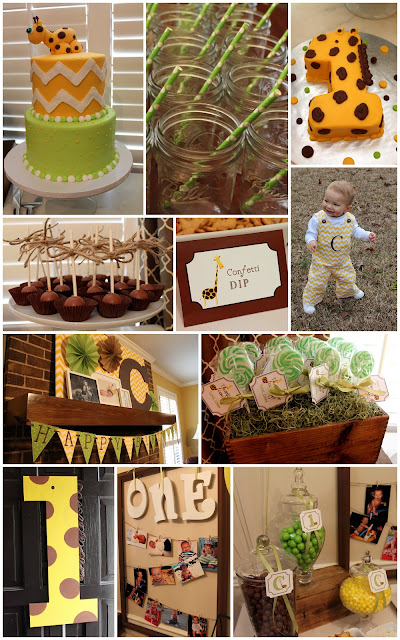 We had a great time celebrating you, Cohen and look forward to many more birthdays! 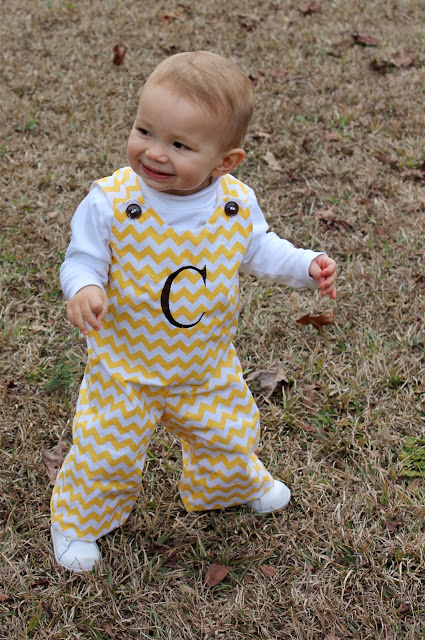