May 29, 2013
Yesterday I started working on different furniture layouts for our baby's nursery.  Yes, you read that correctly.  Jon and I are having a baby!

If you aren't a close friend or family member (or friend who saw our announcement on Facebook) this will be news to you!  Baby Reutter is set to make his/her debut around Decemeber 3.  The original due date was November 26th, but the doc said I was measuring small at my 10 week appoint and pushed the date back a week.  We will see which date is closest in the end.  I know the baby will make its debut on its own time anyway.  Did you know only 5% of women have their baby on their actual due date?  Crazy.  But I digress.

Here is the picture we used to make the announcement on Facebook.  The top left picture was taken of us at the airport heading out to our honeymoon a little over three years ago.  And since we are now adding one to the team, we had to get Baby a Team Reutter shirt as well :) 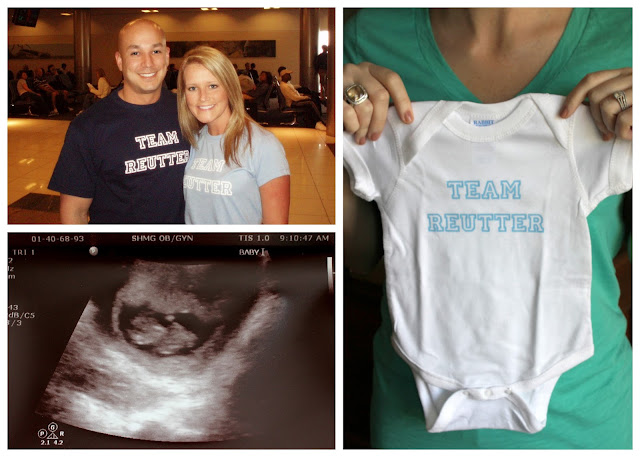 I found out the big, and surprising, news on April Fool's Day.  I've never been a big fan of the holiday because it's full of pranks, and you never know if you can believe what people tell you on that day.  Funny that I find out the biggest news of my life on that day.  I found out in the afternoon, around 1 o'clock.  Naturally, I wanted Jon to be the first to know, but since he was overseas at the time, I had to wait eight grueling hours until he called me on Skype.  Longest. Eight. Hours. Ever.

He was just as surprised as I was by the news and so happy--look at his first question in the conversation below.   His roommate was on the opposite flight schedule as him at the time and was sleeping so Jon had headphones on and was typing all his responses to not wake him up.  I have to say, it's not the way I always pictured us enjoying "the big news" together but at least now I have it all documented.  My favorite part is the last line.  This little snippet will definitely be making an appearance in the baby book :) 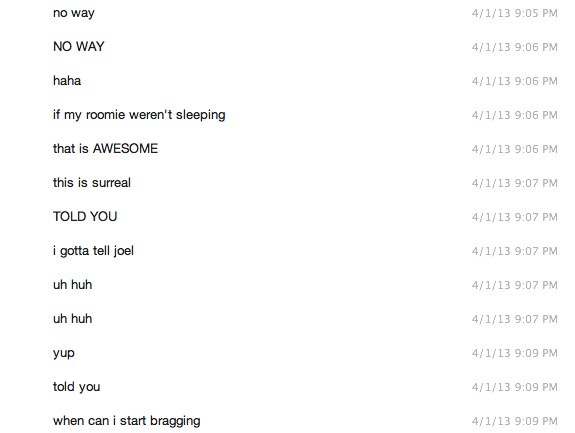 I called my mom next and she didn't believe me.  I literally had to tell her five times and then send her a picture of the positive tests to prove it.  Dang you, April Fool's!  That little story will be in the baby book as well.

So things on my "Mallory Schedule" have been rearranged some, but that's okay.  Part of me always wanted the news of a little miracle to be a surprise, and I know that God's plans are far greater than my own so I couldn't be happier.  Still, it's hard to believe that this Christmas we will be a family of three (five, if you count our sweet fur babies, Remington and Riley).

That also means that the "future nursery" room in our home will be getting painted and made over sooner than I thought.  My mind is currently overloaded with thoughts and ideas, so much so that it's been hard to even know where to begin.  The good news is that Jon came back from overseas on May 2nd and will be here a few more weeks to help me mark things off of the "To Do Before Baby Arrives" list.

Naturally, I'll be sharing updates with you guys on the nursery, favorite items purchased, reveal party, etc.  But although there will be new baby posts, I'll still keep blogging about ALL things design.  After all, I still love it all!

**Sidenote:  I just realized that my last post was entitled "Child's Play"...and it was written two days before finding out the big news.  Foreshadowing, anyone? :)