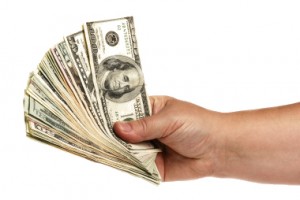 Well I have to say our first yard sale went really well!  Our grand total for the day was $281.25, which is pretty awesome seeing as our most expensive item was only $40.  I was hoping to just make $150, so when I added up the final total, I was extremely excited!

Now for the lessons learned:
1.  Price your bigger items a little higher than you want so that you'll still get your bottom selling price when people start to barter.  I found that it was really just the big items that people wanted to get down in price.  So if you mark them higher to start, customers will feel like they're getting a deal when you lower it, and you'll still make the money you wanted.

2.  Sell with friends.  Our friends, who are also moving soon, brought over their stuff and set up shop as well.  I think it helped having a large amount of stuff out and having big pieces (they had a lot of big items) to lure people in.

3.  If you are having a sale because you're moving, call it a moving sale instead of a yard/garage sale.  This makes people think that the stuff you're getting rid of isn't necessarily junk, but rather stuff you just won't have room for in your next place.  Moving sales are often synonymous with big items for most people which, again, helps lure them in.  All of our signs said "moving sale" and everyone was so friendly and often asked where we were heading next and wished us well.  It was a nice conversation piece.

4.  Don't buy the expensive pre-made garage sale signs.  All of the ones I saw were $6-7 each.  No thanks.  Instead, I went and bought some yellow poster boards and 2 wooden dowels from Hobby Lobby.  I cut the posters in half and placed a piece of cardboard in between the two pieces of poster to give it strength.  I snapped the dowels in half as well so I had two sticks for each sign to use as ground stakes and secured them with masking tape in between the posters.  Lastly, I stapled all around to sign to keep the cardboard in place.  When all was said and done I had two large signs for a total for $3 instead of $12.

5.  When your sale is done, immediately pack up what's left and take it to a donation center.  From setup to full take down, we only spent 6 hours.  It was the easiest way to get rid of our stuff and make a little dough.

On another note, our move has been pushed back a week, so now we're not leaving until next Monday.  I guess we'll be spending another week in Oklahoma after all.