August 09, 2010
Since getting married, I've learned so much more about Jon. I guess that goes without saying, but it is all of the little differences I see in each of us that make me laugh and smile. Here are a few examples of what I mean:
1. "Squirrel!"- Jon and I "squirrel!" about completely different things. I'll admit that I often get easily distracted when I go shopping. I'll be in a store for one purpose and then something will catch my eye, and I'll dart off like a child. This happened the other night when Jon and I went to rent a movie. We had been in the store no more than 20 seconds and were heading back to the dvds, when I saw this beautiful wrapping paper (you know how video stores can't JUST sell dvds). So as usual, I quickly let go of Jon's hand and go to check out the thing that has caught my eye. I got back "on course" pretty quickly though and continued toward the movies. Well the next thing I know, Jon is the one who's let go of my hand and has stopped dead in his tracks staring in wonderment like a kid at the circus at the Anime section.
Yes, my husband loves Anime.
I start to laugh and comment on how we both can get so easily distracted but with COMPLETELY different things. My heart beats fast for beautiful paper and his for Japanese cartoons. He agrees and begins cracking up as well. Then, almost in sync, we both say "Squirrel!" and begin to laugh even more for thinking the same thing. In case you don't know, "squirrel!" is in reference to the dog in UP! who will be talking and then in mid-sentence completely lose his train of thought and yell "squirrel!" when he sees a squirrel. So yes, we "squirrel!" about completely different things.
2. Napkins- Jon is the neatest eater I have ever seen. I noticed this while we were dating, but since being married it's been amplified because I eat most meals with him. He is the only person I've ever known to eat an entire Chipotle burrito and not spill a thing out of it. I, on the other hand, usually can't finish a meal without a portion of it ending up on my clothes. The same thing can be said about our napkins. When I finish a meal I have a napkin, if not multiple napkins, that are crumpled up and covered in stains. Jon's, on the other hand, is always neatly folded a few times over and looks as if it's hardly been used at all. I still can't for the life of me figure how he does this, but I tell him all of the time that I hope our kids take after him :) 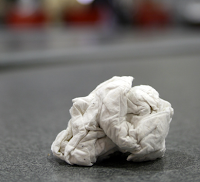 3. Grocery shopping- I am not a big fan of grocery shopping. I like to get in and get out, exposing myself to the least amount of freezing cold air conditioning as possible. I have a grocery list that I keep on our refrigerator so that as soon as I see something getting low, I can write it down and forget about it. Then I take that list with me on the next trip to the store and quickly mark off all of the things I need and head out. That's the way I think it should be.
However, the first time Jon and I went grocery shopping together, I learned that he thought completely different. He wanted to slowly walk down EVERY SINGLE aisle and see everything so as to be sure he didn't miss anything. I almost went insane. Luckily, I do most of the shopping on my own now, and when we do go together, he now knows that I like to get what's on the list and get out. :) 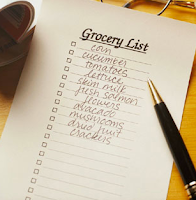 4. Packing- When it's time to go on a trip, I fold everything up and place it in stacks in my suitcase, usually not bothering to use the garment bag that came with it. There's not a whole lot more rhyme or reason to it than that. Jon, however, has everything perfectly in it's place, garment bag in use and everything clipped down and secured. It almost looks as if he's packed a suitcase for a luggage commercial--"With our bags, everything has its place!"
When I am packing to go home from a trip, there's even less thought. My dirty clothes usually get shoved in a bag or maybe hap-hazardly folded if they're lucky, and I'm not so much worried about stacks at this point so long as it all is in there good enough to be zipped up. I figure what's the point when I'm going to wash it all when I get home anyway. Not my hubby. His bag arrives home just as neatly as it left. Therefore, I usually beat him in the packing timing contest even though my bag is usually at least double the size of his. Yet another difference between the two of us :) 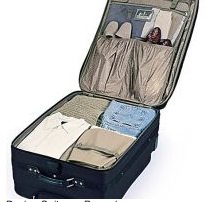 5. Clothes- I believe this next one is something that will resonate with most married couples out there. When I go out of the house, I usually like to have on something cute with accessories to match. I mean if you have a closet full of clothes, I believe you should wear them all. Jon will throw on shorts, a t-shirt and some flip flops that don't all necessarily match. The other day I was waiting in the living room for him to change into some clothes so that we could go run some errands. I'm watching TV and he rounds the corner from the dining room catching my eye. There is my husband in off-white linen shorts and a cotton t-shirt that was almost the exact same color. "You look very creamy," I remarked. He quickly turned around and went back to the room and yelled that he needed me to come help. I couldn't help but laugh.
It's amazing to see all of the little things that can make us so different, but so perfect for each other. I'm always learning new things, and have a feeling that won't end any time soon. :)
What are the differences you see in you and your spouse?

Thank you for your comments. They brighten my day!