Friday was his last assignment night as a flight commander.  His 4th class will be graduating in a couple of weeks.

Saturday we watched a lot of college football, went out to eat, and retired early.

Sunday morning at 3:30 I woke up to the sound of our neighbor's dog barking.  We'd heard him before but it was usually during the day so I found it odd that he'd be doing so at such an early hour.

I looked out the window to see him chained up in their side yard, which I thought was odd since they have a fence (even though it's very makeshift). I wondered why they would leave their dog outside in freezing temperatures with no shelter or blanket.   It really made me mad and upset, and I woke Jon up and told him about but for fear of being shot in the darkness, felt I could do nothing until the morning. So I wake up Sunday morning and convince Jon to go over there with me to see if the dog was okay.  Jon told me we couldn't just trespass onto their property, and I told him that I sure could.  When we rounded the hedges separating our property from there's, we realized the neighbors weren't even home!  They were gone (at least for the night) and had just stuck him outside.  I walked up to the little guy, who was named Lowrider according to his tags, and he was shivering.  And to make matters worse, he was hooked to a cable and had gotten all tangled up from jumping over their makeshift fence that he only had 2 feet of cable to allow him to move. He couldn't reach his water bowl or the empty food bowl.  We untangled him, brought him food and water and then called pet control so they could go in the yard and move his cable back so he couldn't jumped over the fence and get tangled up again.  The pet control guys asked us if our neighbors had been gone all weekend, but all we knew for sure is that they left him Saturday night.  They told us to give them a call back if we didn't see them come back because that would be neglect.

I decided to check on him again before we left for the store Sunday afternoon and saw his cable and collar were hooked on the fence and he was no where in sight.  Jon and I jumped in the car and started to drive around the streets looking for him. We had just made a turn when I looked back in the opposite direction and saw him down the street.  So we snatched him up and Jon moved him cable again, screwing it further back in the yard so he couldn't reach the fence at all.

After we returned from the store, I looked over the fence to check on him again and didn't see him in the yard, nor did I see the red cable he had been attached to. I look up to see Remi sniffing in the corner of our yard wagging his tail. Then I hear Lowrider's bark.  I go over to the corner where Remi is and look over the back fence only to find Lowrider and his long cable wire tangled in the big tree branches stacked behind our fence. Once again he has tried to escape.  Jon goes back there and gets him untangled, and I convince him to just keep him in our yard until the neighbors get home.

We then remember we'd seen a phone number on his name tag so Jon calls it to tell them their dog escaped while they were away, but we found him and had him safely in our yard for them to pickup when they returned home.  The number had been disconnected!  So then we decide we'll leave them a post-it note on their door telling them the situation.  At this point Remi is elated to have another friend in his yard, and I'm just glad the little guy is safe.

Sunday night came and went, and the owners never came home.  We let the pups sleep on our sun porch for the night and put Remi's bed and a blanket out there for them.  I checked on them before going to bed only to find Lowrider all sprawled out on Remi's bed and Remi lying on the floor.  Remi was nice to share, and I'm sure Lowrider had the best sleep he's had in awhile.

Jon looked at their door before he left work this morning and saw that the note was no longer there and their back door, which is always open, was closed.  There was still no car in the driveway though.  I called the vet listed on his rabies tag and give them the identification number to see if they might have another number on file.  They did.  It was disconnected too.  So it's been at least 2 days since they have been home, and if we wouldn't have taken in their dog, he would have been tangled up, with no food and no shelter.  What is wrong with these people?!  And where in the world are they?

At this point we're going to call animal control back and let them know of the neglect.  I'm hoping to convince Jon that we should keep him :)  But even if we don't keep him, we will be sure to find him a better home than the one he had before.  That's for sure! 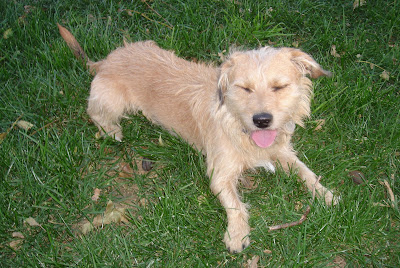 The boys lounging on the back porch.  Notice Lowrider all sprawled out on Remi's bed again :) 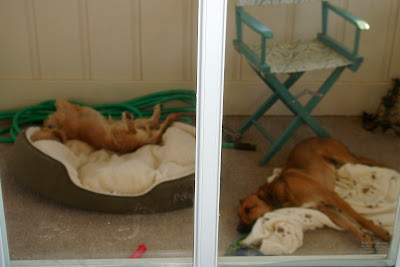 This is all I know for now...I'll keep you updated.